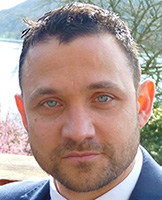 Paul Wright has a wealth of experience in regard to the health and well-being of children and young people. Growing up in the socially deprived town of Blackpool, Paul understands how the life chances of adults are significantly affected by their early years, educational environments and formative adulthood experiences.

During his own education as a young person, Paul sought sport as a means to prosper, using Judo in particular as a means to gaining a place at university/place within the ‘harder society of a town that often offered little opportunities’. Paul attended university in Cardiff studying a Sport & Human Movement Studies Hons Degree, trained with the Welsh National Judo squad and broadened his understanding of education through his new found passion for coaching. On completion of his studies Paul worked as a fitness consultant, leisure manager and set up one of the country’s first Exercise on Prescription GP Referral Schemes, working with patients with severe cardiovascular conditions, amputees, anxiety and depression. Work also occurred with the youngest people in society through his Judo coaching of over 100 pupils a week.

Paul moved on to gain a PGC in Education from St Martin’s College Lancaster, taught within primary, secondary schools and colleges in the North West. In 1999 a position opened to assist in the coordination of the newly formed Manchester Healthy School Award Scheme (NHS) working with over 250 schools to create healthier environments for children to prosper. Paul was part of the first trial for free fruit in break/breakfast times in schools. Within Paul’s role he saw an opportunity to spread health education information in a new format, through interactive computer games and websites. Self-taught, Paul produced a number of best-selling educational CD Rom games on topics such as the Dangers of Smoking, Alcohol & Drugs and Emotional Health. This new company, supported by Paul’s wife, became Wrightype Design: a graphic design and consultancy business.

In 2004 a multi-national Health Education company based in Texas proposed to buy Wrightype Design, but on discussion with Paul instead offered the position as their International Director (currently Vice-President). Through the subsequent years Paul and his wife have continued to grow their business with physical classroom resources called My BodyBoards that utilise magnetic pictures to speak a thousand words. These PSHE resources cover all major health topics to be taught in schools and sell worldwide in multiple languages.

Paul has worked as governor in local schools, has an adopted son with complex needs (ensuring a sound understanding of EHCPs and social care). Paul completed two further post graduate qualifications at Manchester University – PGC in Population Health and a Master’s in Public Health.

Through expertise in the health of young people Paul has been part of the APPG on A Fit & Healthy Childhood, works as the Campaign and Marketing Consultant within the Children’s Alliance and has provided professional advice as part of the wider team around Marcus Rashford.

This website uses cookies to improve your experience while you navigate through the website. Out of these cookies, the cookies that are categorized as necessary are stored on your browser as they are essential for the working of basic functionalities of the website. We also use third-party cookies that help us analyze and understand how you use this website. These cookies will be stored in your browser only with your consent. You also have the option to opt-out of these cookies. But opting out of some of these cookies may have an effect on your browsing experience.
Necessary Always Enabled
Necessary cookies are absolutely essential for the website to function properly. This category only includes cookies that ensures basic functionalities and security features of the website. These cookies do not store any personal information.
Non-necessary
Any cookies that may not be particularly necessary for the website to function and is used specifically to collect user personal data via analytics, ads, other embedded contents are termed as non-necessary cookies. It is mandatory to procure user consent prior to running these cookies on your website.
SAVE & ACCEPT